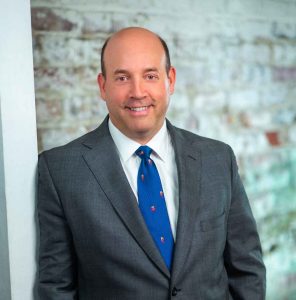 Andrew Neuwirth opened his law practice in Montgomery County in 2011 and focuses his practice on Plaintiff personal injury litigation. With more than twenty years of experience as a trial lawyer and fifteen years experience in personal injury litigation, Andrew helps clients recover compensation for injuries suffered as a result of the negligence of other people, businesses, or institutions.

Andrew grew up in New York City and attended Cornell University. While an undergraduate at Cornell, he served as President of the Sigma Chi Fraternity before graduating with honors and going on to receive his law degree from Cornell.

Andrew serves on the Board of the Cornell Club of Greater Philadelphia and the Philadelphia Chapter of the American Jewish Committee. He acts as an election advisor to Philadelphia politicians. Andrew annually raises money for cancer research as part of cycling in the Pan-Mass Challenge, which is a 200 mile bike ride across Massachusetts. While his wife was attending medical school, residency, and fellowship, Andrew practiced law in New York, Massachusetts, and Rhode Island. Andrew and his wife, an area physician, live in the Philadelphia suburbs.

Federal Court of the Eastern District of Pennsylvania