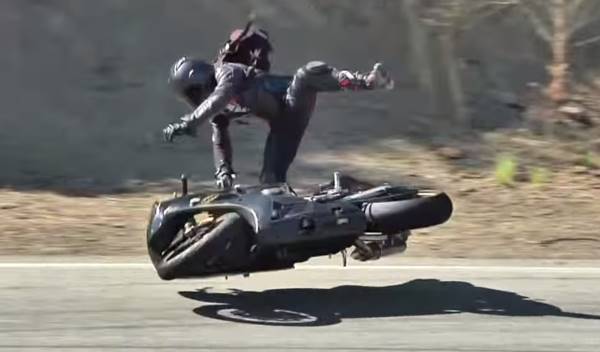 This episode tackles motorcycles hitting potholes and suing the city to me as a serious injury lawyer.

Good morning, welcome to Ask Andy, this is a daily podcast about personal injury practice in Philadelphia, Pennsylvania. I’m Andrew Neuwirth. This podcast is sponsored by my law firm, Neuwirth Law Office. King of Prussia, Pennsylvania.  We are in the suburbs of Philadelphia. You can reach me at 267-3563-1735 or at my office 215-259-3687. So I wanted to talk to you today about motorcycle accidents caused by your local city. So I handle a fair amount of motorcycle accidents and I handle a fair amount of kind of pothole caused injuries, and oftentimes they come together with obviously expected bad results. So,  what’s the typical scenario? I see the typical scenario is motorcycle riding along clear road. No bad weather, no cars around hits a pothole, flies off the motorcycle and breaks a toe, breaks a leg, hits a guardrail and dies and everything in between. So the question is like, well,  know from the lawyer’s point of view, am I interested in that? Is that something I want to work on? And the answer generally is yes. I mean, a lot of people,  car drivers will generally tell me just in passing, though, I don’t like motorcycles. Don’t put me on your jury because,  to some extent, people say, well,  you’re riding a motorcycle, you kind of assume the risk of whatever happened to you. So, you know, one that’s not what the law says, but that may be what the average person thinks.

The second part of the equation is,  people who have motorcycle crashes usually have pretty serious injuries. I mean, I’ve been to visit clients in burn units. I’ve been to funeral homes and I’ve,  seen people who are friends and family of clients who’ve lost limbs from motorcycle crashes. So,  the injuries can be pretty devastating, mostly because you’re on a motorcycle as opposed to a car,  you’re exposed. But the flip side of that is that,  the people who maintain the roads are the townships or the City of Philadelphia, and they know that, motorcycles are going to be on these roads. So, is the motorcycle responsible for the road condition? No. Is the motorcycle responsible for being careful about the roadways? Yeah, there’s some responsibility placed on the motorcycle rider. But what happens if you’re, buzzing along doing the speed limit and you hit a pothole that  just can’t be seen well and you fly off your motorcycle,  were you doing anything wrong as the motorcycle rider? No. So the law in Pennsylvania allows you to sue the township or the city for roadway defects or potholes. So that’s what,  as lawyers, that’s how we end up kind of trying to resolve the situation. We don’t really negotiate with the City or the township because they never really get around to paying attention to the case. So those cases go into suit and the inside kind of baseball.

Part of what happens is that the city has a few defenses. The city has to be on notice that there was a pothole there. So let’s say you want to sue Upper Darby or Norristown or the City of Philadelphia. Those areas have to be on notice. It doesn’t have to be written notice. It just has to be constructive notice so knew or should have known is kind of the standard I use. And then  one of the first things we ask for once discovery gets rolling in a  pothole type case is,  send me every complaint made by anyone about that intersection. And inevitably,  there may not have been a specific complaint about that particular pothole. But,  you can pretty much show that there were complaints about the area or that there were city personnel passing through the area. So,  city personnel passing through the area are supposed to make reports about potholes, et cetera. So let’s say, for example, I’m working. I worked on a case a while back where people were complaining about the exact pothole that caused my client to fly off his motorcycle. All right, so that’s the perfect situation. What’s the the less perfect or the worst case scenario is that there’s really nothing there. But, maybe you have Google images going back six years showing that you’ve got potholes in that exact location. Ok? Is that helpful? Yeah? Is a city employee charged with knowing or should have known about that? Maybe.

But  the City of Philadelphia, particularly less so out in the suburbs is, pretty strapped for road paving money. So there are some, indications on a roadway that that road should have been repaired five years earlier. If you see sort of cracking in a roadway outside of the potholes or just around the potholes, that’s a sign that the roadway is, is done, is cooked, should have been repaired a long time ago. So,  can you blame that on the city yet? Do the little potholes that open up after wintertime? Do those usually cause accidents? Yeah, I don’t know. It just depends on where you are and what your potholes look like. But the potholes I deal with are generally kind of long standing, deep problems that really should have been repaired. And  the question really is like, Look, what are we doing here? We’re paying taxes, we have a streets department or we have a roadway highway department. There have been complaints about this stretch of roadway. Why isn’t it getting repaired? and usually there’s no good reason for that. And,  usually in the cases where you have a serious injury and a pretty direct notice to the township of a of a pothole, you’re going to get your case is going to be settled.  the harder ones are where there’s kind of less direct knowledge chargeable to the township or the city. So, maybe there’s a sidewalk that’s kind of not quite flush or not quite straight.

Maybe that’s the responsibility. And a lot of townships outside of Philadelphia County, the homeowner is responsible for the sidewalk, not the township. And so there’s just a lot of kind of smaller, more important rules. But there are a lot of people call me and say, Well, I can’t sue the city because I didn’t have a serious injury. Well, that’s not actually my experience. I mean, the law says, Yeah, you fly off your motorcycle when you have a booboo, on your on your elbow, you can’t sue the city. Ok, well, what are the rules? The rules are you got to have serious impairment or serious physical injury. All right. Well,  can your average person do that to your average person to prove that? Maybe not. But can I as a lawyer? Yeah, probably, because I’ve read the cases and I can tell you what the cases say, and a lot of times it’s just,  scarring–permanent scarring–is enough to surpass that hurdle. So, obviously, a broken toe is enough. Road rash is enough. You know, there are a lot of things that are scarring. That’s easy enough,  so it’s like you’ve got to talk to a lawyer, you’ve got to run your cases by a lawyer. You’ve got to ask someone, you know what? What does the law really expect when the law says serious physical injury? That’s a pretty nebulous or mushy term.

So,  look, you fly off your motorcycle, you have a booboo on your elbow. Is that enough? No, I don’t think so. Like, why would why would you bother pursuing that case? What about you fly off your motorcycle, you break a toe? Is that enough? I’ll tell you, I settled a case a couple of years ago for a hundred grand for that. You know, now I have to give you the usual sort of shtick about past performance is not a predictor of future results. But why? Why’d that case settle? Well, it’s settled because, you know, I had actual notice that the pothole was a problem. My guy flew off. He was in the burn unit. You know, he ended up recovering from his burns and he had a broken toe and the toe wasn’t going to work. So  that it is what it is. Is it serious physical injury if your toe doesn’t work? I think so. He thought so. He couldn’t ride his motorcycle anymore. So look, there are a lot of things that go on that really. It’s not kind of a DIY system. There’s a reason lawyers exist in any system, but it’s definitely worth any motorcycle accident happening to you, your friends, your family is worth checking out with me or some other personal injury lawyer. All right, that’s enough for today. Again, I’m Andrew Neuwirth. This is a daily podcast. I hold people accountable for their negligence. Have a great day.