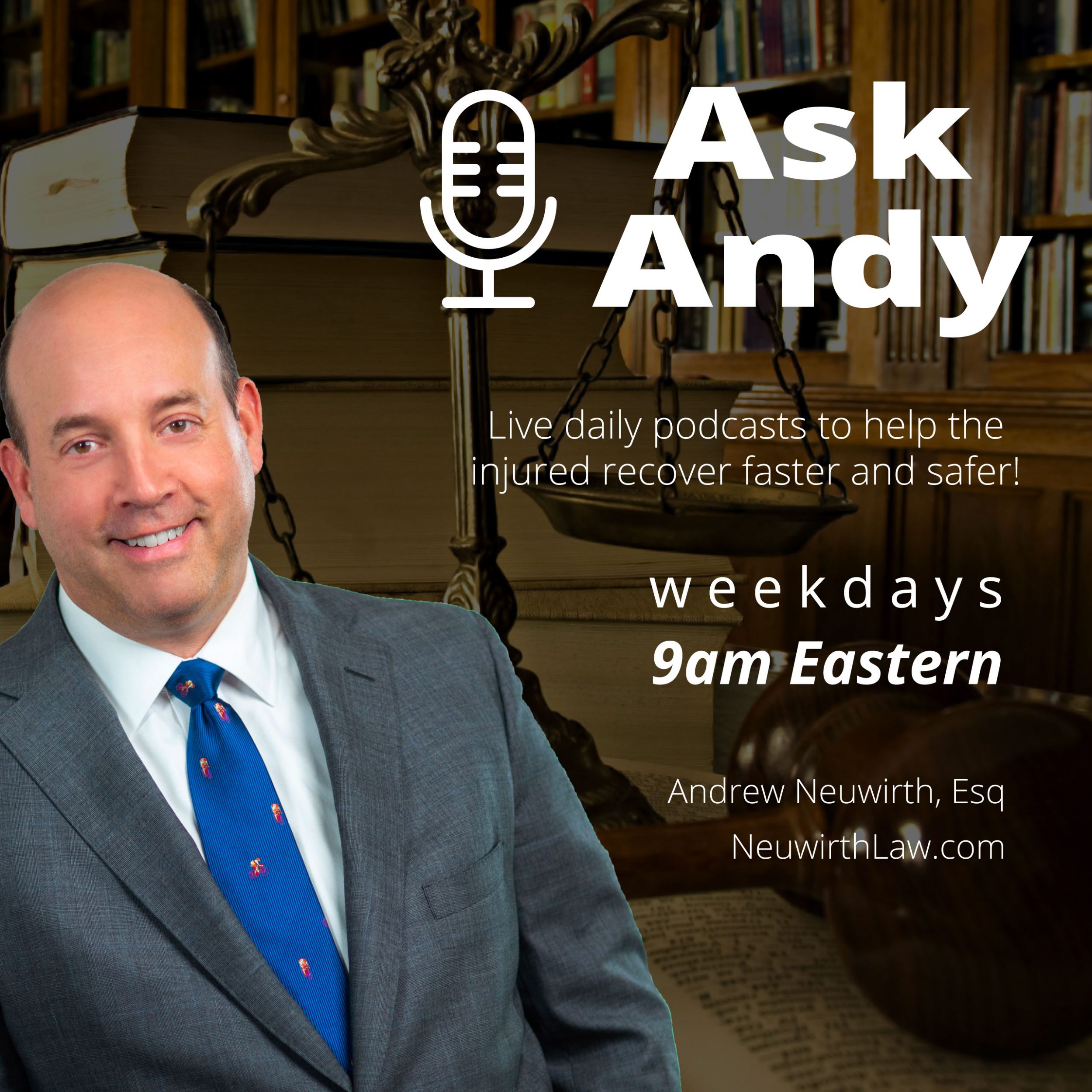 Good morning and welcome to Ask Andy. This is a daily podcast about personal injury practice in Philadelphia, Pennsylvania. I’m Andrew Neuwirth, so I wanted to talk to you today about situations where you are rear ended in a car crash. Now the easy ones are someone you’re stopped at a red light and someone crashes into the back of you. What does that mean for your personal injury case? Well, first of all, I know this is kind of this is very basic to me, but there are two things I try and tell clients at the outset of these cases. One, You’re going to win your case, OK, there’s not going to be ever a discussion about who is at fault because there’s no excuse for running into the back of someone’s car. So these are the easier cases for lawyers in terms of, you know, the grand scheme of all cases possible. Now the caveat or the exception to that you’re going to win your case is if you’re limited tort, then you’ve got to show that you have serious impairment of bodily function, which is, you know, getting more into the harder lawyering and some of the proof and this and that in your medical records. So but in terms of the basic rear ended case, there’s never an excuse for rear ending somebody. I know that’s kind of basic to me, but you know, in terms of what the driver who hit you was doing, what were they doing? They weren’t paying attention or they were going too fast or, you know, any number of other things, none of which are OK.

So, you know, there are a couple legal aspects that play into this, but one of them is, you know, I’ve had situations where people are rear ended at fairly high speed because someone was driving along and they hit their brakes and they skidded on oil that they couldn’t see on the ground or on rain or on dirt. Or, you know, who knows what. But the law is exquisitely clear that, you know, roadway debris, roadway oil, rain these are all things that are not excuses for not being able to stop your car. It’s called the sudden emergency doctrine. And the only thing that really is known as a sudden emergency that is an exception for liability is if a deer runs out in front of you or something like that, OK? So absent the deer situation, you’re going to be responsible if you hit somebody from behind. And so in the person, in the vehicle that’s hit from behind, you know what usually happens to them? Well, oftentimes you were sitting there, you know, at the light weren’t really expecting you to be hit from behind. And oftentimes, the person who’s doing the hitting was expected to slow their vehicle down and was, you know, would have hit you at a lot higher speed than they would have normally had they been paying attention.

So, you know, what does that mean? That means that you take a fairly hard shot from behind when you’re in these rear vehicle accidents. I’ve had plenty of situations where there’s really minor damage on the on your vehicle and there’s major damage on the other vehicle. I’ve had situations where there’s minor damage on your vehicle and minor damage on the other vehicle, and I’ve had situations where, you know, people got hit from behind by a bus and the whole back of the car is destroyed. You know, one of the wrinkles in these cases is, well, what happens if a car two cars back runs into a car behind you and hits that car? And sort of, you’re the third car in the chain chain reaction? Excuse me. So what happens in that situation? Well, in that situation, the car that hits you is actually not the car at fault. Right? So is that car that hits you? It’s kind of the chain reaction car. Is that person liable or responsible in any way to you? And generally, the answer is no. Now, if you’re paralyzed or killed or have some, you know, tremendous injury, you know from which you won’t recover, then you know, we have to start looking at that in between car and see if there’s an argument to be made that they may have some liability, even if it’s only 10 or 25 percent.

But usually in between car and you are in the same situation, you were both hit from behind as a result of this negligent driver’s actions. Ok, but look, let’s say your full tort in your rear ended. You’re going to you’re going to win your case. End of story. Full stop. Just a question of of when and for how much. What sort of injuries occur when you’re hit from behind as opposed to as opposed to being hit from in front, well hit from behind injuries are often for some reason lower back injuries and rotator cuff injuries happen a fair amount and there’s a decent amount of concussions that come out of this. So, you know, basically the injuries sort of process that we see as lawyers following these, you know, traumatic car accidents is all of this energy from the striking vehicle ends up in your kind of passenger compartment and goes into your body and then passes through into the vehicle. So you just you take a pretty substantial shot of energy into your lower back and you’re kind of unprepared for it. People who are more prepared for it, like who brace themselves on the steering wheel because they see it coming, usually suffer kind of rotator cuff shoulder and wrist injuries because that energy goes through you and kind of transfers into the steering wheel that doesn’t have any give to it.

So look, that’s usually what we see in these rear end car accidents. They’re kind of the routine, easier accidents. You know, unfortunately, if you have, you know, preexisting conditions and you’re more at at risk in these rear end situations, you’re going to take, you know, a worse injury or a worse shot from the same amount of injury as somebody else would. So, you know, if you’ve got a prior back surgery or prior back hardware and all of a sudden you know you’re you’re hit from behind by someone not paying attention at high speed, you know, you’re going to you’re going to suffer more than than I might or someone else might. So, you know, that’s it. I think that’s pretty much the basic rear end car accident in terms of what happens during the lawsuit. You know, if we can’t settle the case, I’ll take the deposition of the person who hit you. And you know, the deposition is something along the lines of, you know, why this happened? Well, you know, I didn’t expect the light to change. Sometimes people I’ve had people say, you know, I dropped, you know, chicken nuggets in my lap or I was reaching for something on the ground or I just looked away for a split second. You know, none of that is terribly believable, and it’s an effort by the defendant driver to minimize one their conduct, even though their lawyer knows they’re 100 percent at fault.

And then they usually say, Oh, and the damage was minimal, which may or may not be true. And they also say the the driver of the car, I had looked fine. Ok, so it’s all an effort to minimize conduct that everybody knows is wrong. So, you know, why are they minimizing conduct? Well, in the deposition, all you really want to see is that you know what they’re going to say. I don’t, you know, I can test what they’re going to say. But the purpose of the deposition oftentimes is to get their story down on the on the transcript and know what they’re going to say for trial. You know, it’s not usually terribly impactful if the person is trying to minimize their negligent conduct. That’s sort of what I would expect. What’s more surprising sometimes is people come in and say, Yeah, no, I’m 100 percent of fault. Ok, thanks. And that’s actually an easier, more pleasant deposition. And it’s actually the truth. People who try and minimize are really trying to reduce their culpability, their blame worthiness, which doesn’t make a lot of sense to me, except it’s sort of human nature. I think, you know, you don’t want someone to tell you you did wrong. It’s very hard for people to appreciate that they’ve done something wrong and to say it or to admit it. But if you have a lot of insurance, then why don’t you just say, Yep, I’m at fault? End of story.

Full stop. Pay the insurance. I never quite understood why people with a lot of insurance, you know, fight with me on who’s at fault. So, you know, mostly it’s because they don’t want to admit they’re at fault or because their insurance paid for their lawyer and their lawyers tell them, Well, I’ll try and minimize your conduct. You know, I don’t really get why most people who say, Yep, I was at fault, my fault, I did it. That’s the easiest deposition for both sides, and it’s the truth. So as you work your way away from the truth, the depositions get more and more confrontational, contentious and really, frankly, you know, if you had someone from behind at high speed, you know, look kind of stupid in the eyes of just about anyone. So why not just, you know, admit your conduct and move on? So. That’s kind of my view of the rear end car crash. But these are the easy ones. We’re happy to handle them. Most of the times we take a real firm line on demand and what the case is worth. All right. So this is not legal advice. This is just me musing on my practice and what I see in Philadelphia car crashes. I hope you have a great day and we’re heading into a nice time of year here. So take care. I hold people accountable.